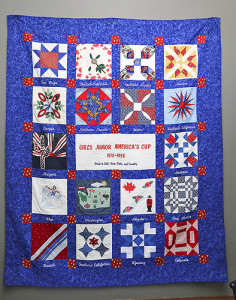 The Anniversary Quilt was displayed for the first time at the 1998 Cup Tournament in Fresno, California, the 20th Anniversary of the Girls Junior Americas Cup Team Matches.

The idea was presented to the Team Captains in 1996 in Washington in preparation for the 20th Anniversary. Each Association had one year to prepare a quilt block that was representative of their State, Province, or Country. Blocks were turned in at the 1997 tournament in Wyoming. The Quilt was assembled and quilted by Carol Orona, Captain Northern California.

The Quilt travels from State to State, Province to Province and Mexico, being displayed at each event. The Quilt center reflects the motto of the Girls Junior Americas Cup: Pride in Self, State and Country.

This is an important function of the Girls Junior Americas Cup Tournament. It is essential that the tradition and pageantry of this Ceremony be perpetuated throughout the years of this Competition. Weather permitting, this affair should be held outdoors.

The Opening Ceremony and Banquet are special formal occasions. The Team uniform shall be dresses, skirts, formal dress slacks or shorts, unless otherwise specified by Host Committee and approved by the Executive Committee. All Teams will parade with their State /Province / Country Flag. The GJAC Committee provides Flagpoles and Flags. The individual names will be announced as the teams enter (any name clarification should be done prior to the ceremony), the order shall be Captain, carrying the flag, Assistant Captain, Players #1, 2 3 and 4. Teams should enter before the speaker starts. 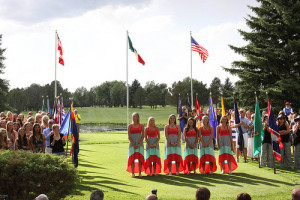 Everyone shall stand at attention during the playing of the three National Anthems. The National Anthems will be played by live music or a recording (CDs are included with the Flags sent by previous Host Association).

The program for the Opening Ceremony shall include:

As in the Opening Ceremony, each Team will parade with their Flag in the same order. Attendance at the entire Closing Ceremony is mandatory.
The program for the closing ceremonies shall include:

Official photographs to be taken are:

The GJAC provides First, Second and Third Place medals for all winning Team Members and Captains. In the event of a tie for 1st – 3rd place, ties will not be broken and duplicate medals are awarded (duplicates will be mailed). Additionally if there is a tie for 1st place, the second place medal will not be awarded. If there is a tie for 2nd place, the third place medal will not be awarded.
Ties for 4th to 18th place will be broken by counting all four scores of the final round to determine team finish.
The Team Captain of the winning team takes a commemorative plaque back to her state.

This award is a tribute to our founder, Joan Teats and started in 2014. A team is chosen by the host organization and each team member is awarded a charm with the inspirational words "Leadership, Sportsmanship, Honesty, Respect and Friendship." 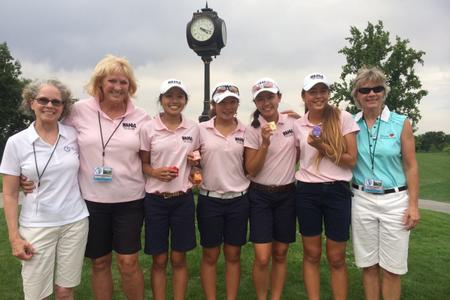